I think I've quit writing about 100 times. I've never wanted to write novels, I've only ever been interested in writing screenplays. The syntax seemed to work with left-leaning, software engineering, brain.  John August has mentioned this on Script Notes, that screenwriting lends itself more to "tech" people.

In 2004 my third screenplay Four of a Kind advanced to the Top 100 (semi-finals) of the third season of Project Greenlight. When I heard that news, I don't think I'd ever been more excited in my life. I figured after 18 months of screenwriting, all the hard work had paid off.  Even if the film didn't win and go into production, I could tell everyone I was a Top 100 semi-finalists and doors would open.

What I often heard was, no one gives a shit about any contests other than the Nicholl.

Well, today, after 12 years of screenwriting, I'm a Quarter Finalists in the 2015 Nicholl Fellowship with my screenplay "Compatibility" previously titled "The Love Algorithm". 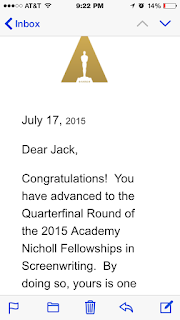 Here's the logline if you're curious and of course reach out if you'd like to read it.
To impress a young journalist, a Facebook programmer leaks an app which accurately predicts two people's chances of falling in love. Its sudden release to every user's profile leads to unintended consequences.