Looking out the window of this Twin Otter, I see the rural landscape of Illinois slowly fade away. I check my altimeter: 7,000 feet. We’re only half way there. My tandem instructor Rudy locks me in place and hands me a pair of goggles.

“If your contacts fall out, they’ll be in there, don’t put these on until I tell you” he yells.

The videographer in front of me asks if we’re ready.  I nervously smile and joke that I hope my instructor is ready.

The pilot tells us we’re good to go. Two things I’m surprised about: how cold it is, and how loud it is. Why I didn’t expect that, don’t know.
They slide open the door and they inch my brother to the exit.  His videographer exits the plane and hangs on to the outside – this is not normal human behavior, this just all looks incredibly strange.

They disappear from the plane in an instant and my mind goes back to July 2002.

Staff Sergeant West looked at my baseball cap and smiled.

“Obviously you won’t be doing this for patriotism…”

I had this “Rage Against the Machine” baseball cap for almost five years.  It was kind of ironic, sitting in an Army Recruiters office talking about reasons to enlist while wearing the hat of the most left-leaning, anti-establishment, anti-American band that has ever hit mainstream success.

But on this morning I don’t care.

The terrorist attacks of September 11th occurred less than one year ago, and like many Americans I felt the need to do something.  Going to work, and “buying things” as our leaders in Washington encouraged just didn’t seem to be enough.

I was 22 with a degree in engineering and I wanted to do more.

I had already aced the ASVAB and we were going over possible MOS’.

The Armed Services Vocational Aptitude Battery is like the entrance exam for the military.  You need a 30 to pass.  Seriously, a 30. To join the Air Force you need a 50.

I think I scored over 100, which put me into Alpha range.

Recruiters need to bring in a certain number of alphas each recruiting cycle, which made me prime real estate for Sergeant West. I knew that. He knew that I knew that, and so we talked.

“Seventy Four Bravo” – Information Systems Operator and Analyst was the Military Occupational Specialty that he recommended.  It had an enlistment bonus of $20,000. Through the Loan Repayment Program, my student loans would be completely paid off in three years courtesy of the United States Government.

I would work on the information Systems at whatever military base I went after Basic Training. Somehow I figured this would end up with me replacing mice and keyboards for some Colonel who was riding the bench toward retirement and doing inventory on computer parts and rewiring the server room.

That didn’t seem like joining the fight to me.

With my limited eye sight, there’s no way I could get them to send me to the RIP (Ranger Indoctrination Program) or even 11 Bravo – Infantry.  But there had to be something more engaging, more adventurous than basically being the help desk guy.

Sergeant West flipped through the large binder and while he mentioned 97 Bravo – Counter Intelligence Agent, or Military Intelligence 35 Lima, my eyes were fixed on a small section outlining the enlistment bonus for graduating from Airborne School.

If you joined the military and agreed to go to Airborne school, and you graduated, you got an extra $3000; on top of any other enlistment bonuses.

“We don’t really need our computer nerds jumping out of planes do we?” Sergeant West laughed again.

I don’t think that comment lost me, but knowing my visual limitations, I realized I was barking up the wrong tree for that “something more” I was looking for. After all, joining the military to go to Airborne school would be like enlisting to get in shape – sadly I know people who have done that, but I digress.

So back to that twin otter.

My instructor pushed me forward, he again reminded me.
“Hold on to your straps until I tap you not to!  Chin up, hips forward, legs back.  If you can’t breathe, just scream!” 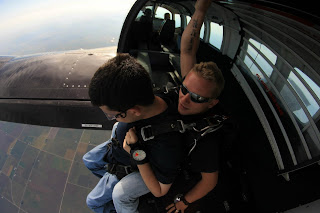 As he leaned me forward and off the plane I try not to think about words like malfunction, human error, accident. Things like, “we’re not responsible for”, “waiver of liability”. It was quite easy not to because I couldn’t believe how violent it was. Extremely loud.  My ears rang, and popped. At three seconds, we’re half way to terminal velocity. 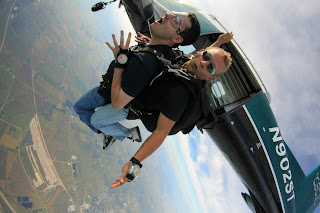 I was completely disoriented and had no idea where up or down was – looking back at the video that’s because we flipped over as we left the plane.

A third of the way through free fall, terminal velocity is reached. 120 miles per hour. 50 meters per second. The downward force of gravity has equaled the upward force of drag.  Net force zero. Terminal velocity. AKA – I’m going really fast. We could go faster if we keep our limbs tucked into our bodies and keep our heads down, but we’ll save that for another day.

I’m terrified and exhilarated at the same time.  Like being a female voter and seeing Sarah Palin win the presidency – excited for the first woman president, but – well you get my point.

I locate the videographer and it’s as if he’s just sitting on air. The wind whips at my face.

At some point my instructor waved in my face to pull the chute, but I didn’t see it.  So he kindly pulled for me.

As the parachute opens, it’s quite jarring.  Going from about 120 miles per hour to about 30 in the span of a second gives the feeling of being pulled skyward.
The noise ends, the wind stops. It’s calm and peaceful. 6000 feet above ground with nothing but your thoughts and an incredible view of – rural Illinois.  Not much to see, but still breathtaking.

It dawns on me that the only thing keeping me alive at this point is some straps to a parachute – I hang on to them for dear life.  While removing my goggles and altimeter I keep one hand on the straps at all times – this amuses my instructor.
Since I was the last one to jump – I see my brother land below me.  I see the videographer land as well.

At about twenty feet they tell you to lift your legs and it’s the softest landing you can imagine.

I thought of two things once I landed.

One, I’m really glad I didn’t have to man a rifle and fight an enemy once I landed and secondly, when do I go again?